In 2000, Federal Way firefighters responded to 9,471 emergency incidents, an increase of 6.7% over 1999 alarm totals. Responses for 2000 are further broken down as follows:

The Federal Way Fire Department provides fire and emergency medical services to the City of Federal Way, parts of unincorporated King County, and parts of the City of Des Moines via a contract for services. The response area is approximately 34 square miles and encompasses more than 100,000 citizens.

Firefighter-EMTs from six stations handle fires, trauma and medical emergencies, hazardous materials emergencies, rescue situations, and other service-related responses to assist our community when in need.

Six engines, a ladder truck and an aid car are staffed 24 hours a day. The department also provides hazardous materials response technicians to surrounding departments via a contractual arrangement which reimburses the Federal Way Fire Department for all costs associated with providing the assistance.The average response time for emergency crews in 2000 was approximately 5 minutes and 33 seconds. The response time calculated by the Federal Way Fire Department includes dispatch processing time, crew reaction time and actual travel time until our emergency crews arrive at the scene of the emergency.

Operations personnel work in 24-hour shifts, providing service to the Federal Way community. A total of 86 personnel are assigned as follows for each of the three shifts (A, B and C):

In April, three new firefighters joined the ranks to replace recently retired firefighters. This allows the department to continue toward our strategic plan goal of three firefighters on every engine company.
Firefighters Go Back to Kindergarten

As part of a re-designed school program, crews at every station were partnered with an elementary school in their area to teach kindergarteners fire safety basics. Their efforts were well-received by both students and teachers.
Recognition of Excellence Committee (REC) Active

Several individuals received recognition awards in 2000, ranging from Letters of Commendation to the prestigious Meritorious Unit award. The REC was formed in 1999 to provide a means to recognize firefighters and citizens who perform service to the community, or perform heroic acts at emergency scenes. 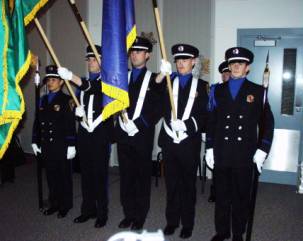 Of a total of 7,193 EMS responses, 615 involved no patients. This number includes 25% of all motor vehicle incidents to which the department responded.

Of the remaining 6,578 calls with at least one patient, the totals are broken down as follows:

As in 1999, “respiratory difficulty” and “other illness” were the leading reasons patients called 9-1-1. With some changes in rank, the other leading causes remained the same except for “other abdominal” which was new on the top ten list (replacing “other cardiac” in the 1999 list)

For Medical-Illness calls, the 10 most frequent reasons for response to patients were as follows:


When medical calls are considered by group (type of illness) rather than individual call, the most common reasons patients called for aid were:

865 (24.1%) All other medical/illness response categories

For Trauma calls, the 10 most common reasons for emergency response to patients were:

As in 1999, falls were the leading trauma response for patients. Overall, there were more responses to Motor Vehicle incidents (812), however, only 606 involved patients.

Due to a change in King County EMS coding during 2000, drug and alcohol responses were combined. This moved them into the position of fourth most common response (as compared to sixth and ninth when tracked separately in 1999).

As in past years, “false call” was the leading non-medical response. The number of false calls increased 26.5% over 1999, primarily due to a nearly three-fold increase in malicious or mischievous alarms which grew from 59 in 1999 to 143 in 2000.


Number of
In-District
Incidents Type and Number of Call

Careless cooking remained the most common fire cause, with 30% of structure fires originating in the kitchen. For structure fires, the area of origin was as follows: